Before starting to develop an iOS app, we have to think of the structure of the project. We need to consider how we add those pieces of code together so they make sense later on - when we come back and revisit a part of the app - and how to form a known “language” with the other developers.

If you missed the other articles you can access them below or you can find the links at the end of this article.

We are going to explore how we can simplify navigation, by introducing the Coordinator pattern to our code.
As usual, we will see how we apply the pattern to each screen, seeing the actual implementation and the source code. At the end, we will show the build times and detail some key observations about MVP with Coordinators, compared to the other architecture patterns.

If you just want to see the code, feel free to skip this post. The code is available open source here.

Why an architecture pattern for your iOS app

The most important thing to consider is to have an app that can be maintainable. You know the View goes there, this View Controller should do X and not Y. And more important the others know that too.

Here are some advantages of choosing a good architecture pattern:

Given an iOS application with 6-7 screens, we are going to develop it using the most popular architecture patterns from the iOS world: MVC, MVVM, MVP, VIPER, VIP and Coordinators.

The demo app is called Football Gather and is a simple way of friends to track score of their amateur football matches. 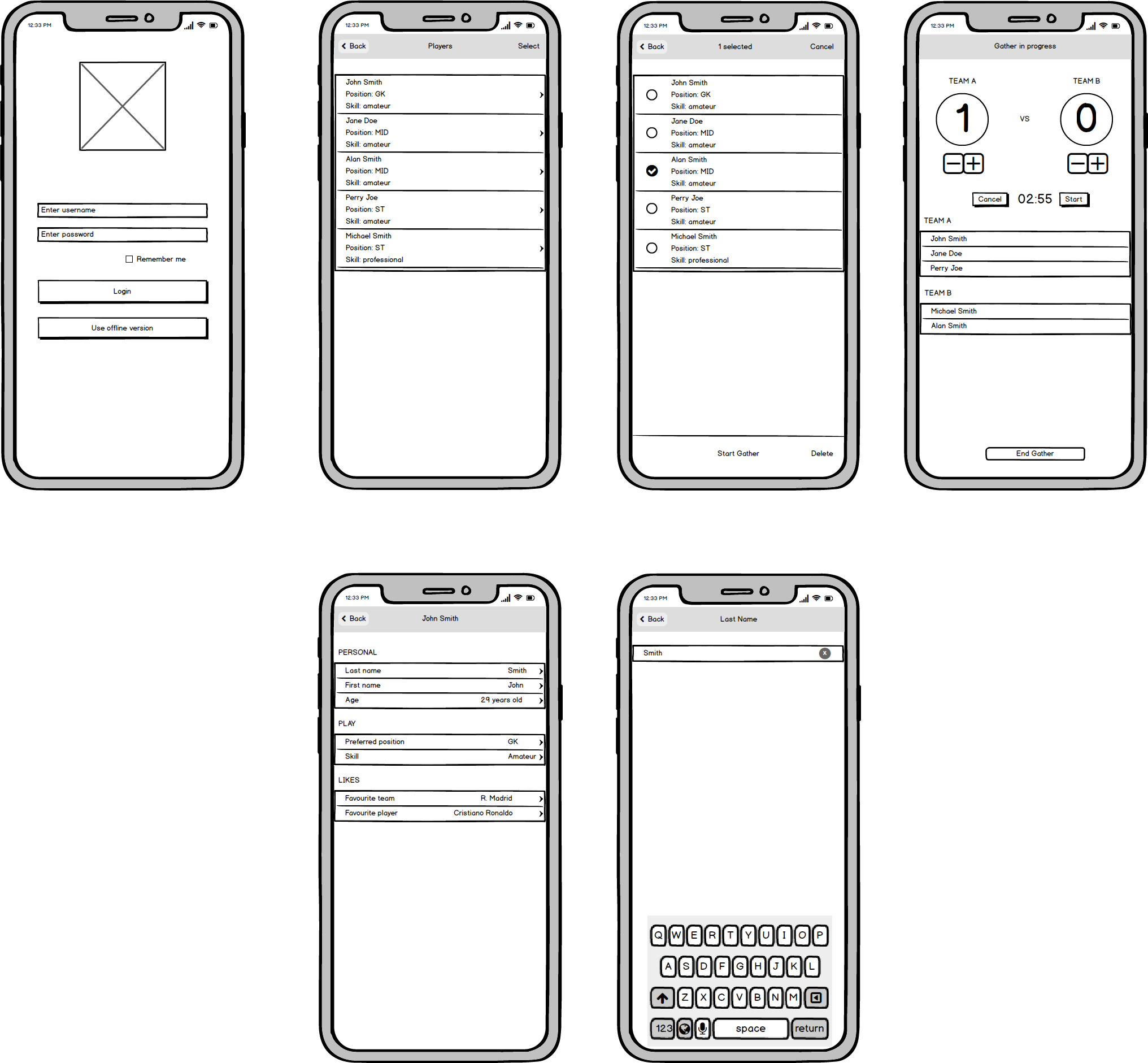 The app is powered by a web app developed in Vapor web framework. You can check the app here (Vapor 3 initial article) and here (Migrating to Vapor 4).

The concept of Coordinators was first brought by Soroush Khanlou, in 2015, as a solution for handling the flow logic in view controllers.

As your app grows in size and complexity, you might need to reuse some of the view controllers in new places, and by coupling the flow logic in the view controller is hard to achieve that. To execute the pattern well, you will need one high-level or base coordinator that directs the whole application, as Soroush states.

There are a few benefits of extract the flow into a coordinator:

You start with the app coordinator, solving the problem of doing so many things in the AppDelegate.
Here you can allocate the window object, create your navigation controller and initialise the first view controller. In Martin Fowler’s - Patterns of Enterprise Application Architecture is called the Application Controller.

Besides the flow logic, the coordinator also takes the responsibility from the view controllers of model mutation.

One way of solving this problem is to keep a reference of the coordinator inside the view controller and call its didFinish method in viewDidDisappear. This is fine for a simple app, but we won’t solve the problem when we have, for example, multiple view controllers shown in the child coordinator.

As Soroush mentions, we can implement UINavigationControllerDelegate to get access to these kind of events.

Applying to our code

We start first with defining our application coordinators:

The start function takes care of allocating the view controller and pushing it into the navigation controller stack.

We define a Coordinatable project that our view controllers will implement, so they can delegate to their coordinator specific navigation tasks (such as going back).

Next, we create our main app coordinator: AppCoordinator and initialise it within the AppDelegate.

Our first screen is Login. We do the following adjustments so it can support coordinators:

The LoginCoordinator is presented below:

An alternative to Coordinatable, is to use delegation i.e. create a LoginViewControllerDelegate that contains the method navigateToPlayerList, and make LoginCoordinator the delegate of this class.

And the final piece for LoginScreen, is to remove the segues from the storyboard. 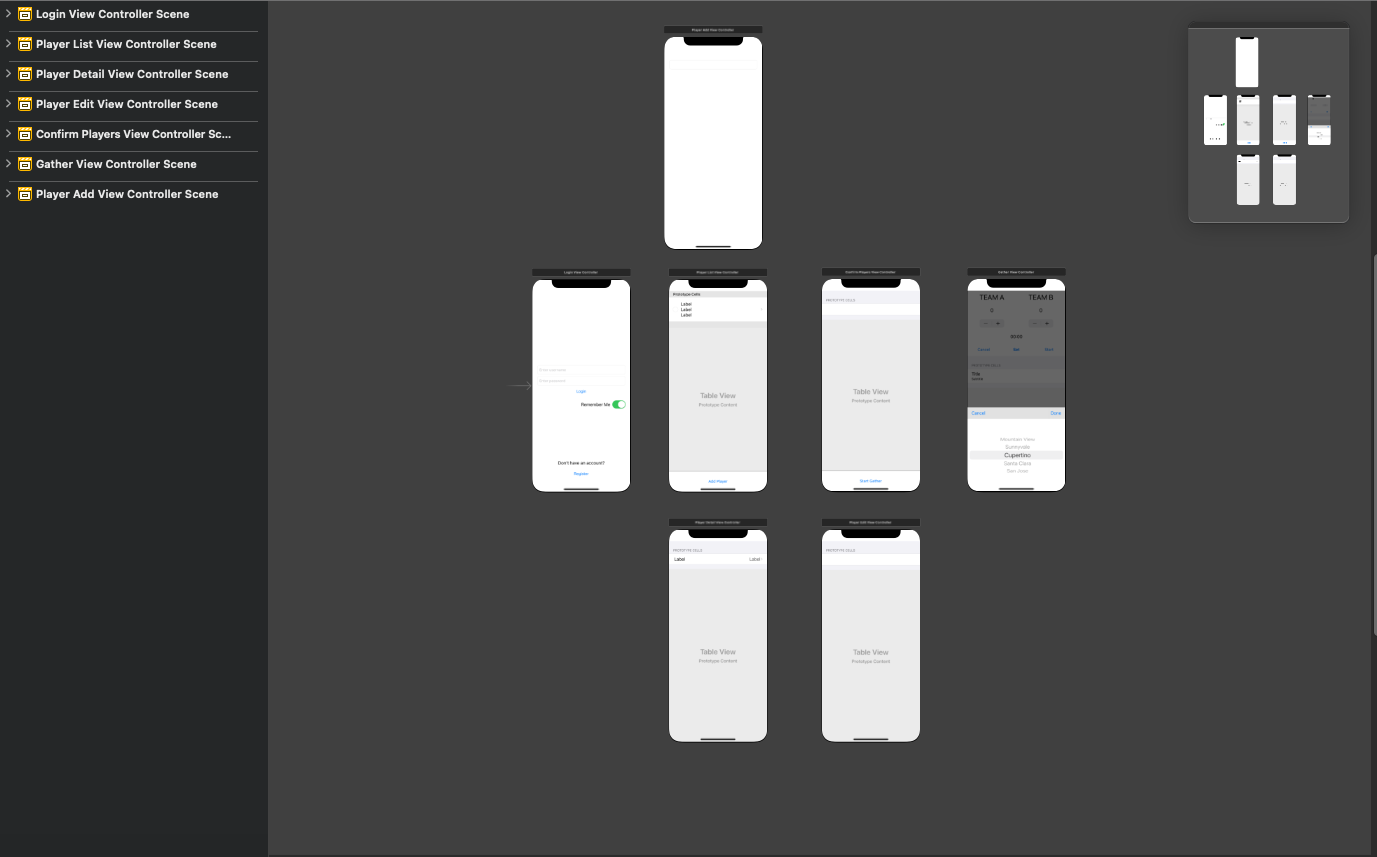 As we are going to instantiate all of our view controllers from the storyboard, let’s define a convenient method to do that:

We now can allocate a view controller by setting the storyboard ID in the designated storyboard and use:

To navigate to different screens from PlayerList (to Add or Edit screens, for example), we created the appropriate segue identifier in the Presenter and forward it to the ViewController using the View layer. We now deprecated the use of segue identifiers, all routing will be done using Coordinators. So, let’s implement these changes:

The coordinator implementation is presented below:

There are quite a few changes we had to do to PlayerEdit and PlayerDetail screens.

Firstly, we had to make them implement Coordinatable, so we can have a reference to the coordinators, same as we did for PlayerList.

In PlayerDetails, we had to make setupTitle method public, because when we edit a player and change its name, we will need to communicate this change to the ViewController so it can refresh the navigation title. The title is actually the player name.

Same thing we did to reloadData(), and created a new function updateData(player) to communicate to the View the player changes.

We use PlayerDetailViewDelegate to listen to changes that happen in the View layer:

PlayerDetailViewDelegate has now changed the simple didRequestEditView method, into the one that you see above.
This is called from didSelectRow table view's delegate:

The implementation is pretty straightforward:

The add players feature is impacted a little, because it’s very simple. The coordinator looks like this:

In PlayerAddViewController, we modify didAddPlayer (that is called from the View layer) as presented below:

In ConfirmPlayers, we take in the selected players dictionary, we choose a team for them and finally we start the gather.

Finally, GatherCoordinator is detailed below:

Another one bites the dust. Congrats! We have finished another Architecture Series implementation article.

We discovered together how we can implement the Coordinator pattern to an existing application, simplifying the View Controllers.

Firstly, we had to take off all segues from the storyboards, leaving some hanging screens there. If we would open again the Main.storyboard we wouldn't know how the screens are connected. We can find that somehow from how the view controllers are positioned, but this isn't very intuitive in all cases.

Then, we introduced some new classes at the Application level to create the main coordinator.

Next, we took module by module and applied the new pattern, simplifying how things are passed between the screens and how we initiate the next step in our journey. We no longer need to perform segues, hold a reference in the Presenter of the Model and when the View Controller is prepared to perform the segue to go way back to the Presenter (or hold a reference in the ViewController) to retrieve the Model we need for the next screen.

Finally, we implemented the Delegation pattern to communicate from child to parent coordinators (e.g. adding or editing players communicating back to the player list to refresh the screen).

I think this is a great pattern and can be used in all apps that want to move away from segues and Storyboards.

By looking at the number of lines of code, we have introduced 348 new lines.

However, we now have 64 LOC less in the view controllers.

As we can see in LoginViewController we increased the LOC with three. Quite unusual...why is that?!

Well, view controller is simple and it had just some one liners when performing the segues. When adopting the Coordinator pattern we introduced two new variables:

The Views and the Presenters have kept mostly the same number of LOC.
Some small difference in the PlayerDetail module, where we introduced 3 new LOC in PlayerDetailView, because we introduced three new variables to be passed to the Edit screen (see didSelectRowAt method). However, we managed to remove 7 LOC from PlayerListPresenter.

So, as expected, the main beneficiaries of this pattern are the View Controllers.

The build times have increased a little, probably because we have introdued new files and the compiler needs to do more stuff. Each time we are doing a clean build and wiping the Derived Data folder, we loose almost 2 seconds compared to the app coded in MVP without Coordinators and more than 5 seconds when the app was using MVC.

This is not catastrophic, we usually use a CI solution for this and we don't need to wait locally to have all tests green.